skip to main | skip to sidebar

Overview of The Temple Project

The Temple Project is a series of works which explore the intersection between place, voice, the vibratory power of sound, and ancient sacred sites. I began this work in the fall of 2004 when I visited a variety of ancient sites on the islands of Crete, Patmos, mainland Greece, and Malta - all locations whose borders touch the Mediterranean Sea. I visited ritual caves, Minoan temple/palace sites full of tourists, an abandoned acropolis, the remains of the site where the Eleusinian Mysteries were once celebrated, the incredible underground temple known as the Hypogeum in Malta, and many other sites that were in various stages of archeological investigation.

At each site, I made a series of vocal improvisations, recording those along with aspects of the contemporary soundscape I encountered while there. For the improvisational process, I drew on my understanding of how the human voice is a map of the inner worlds and has the ability to reveal the story held within the body. The power of vibratory sound through the human voice can unlock our inherited remembrance that is encoded into the DNA structure.

Intuitively, I expanded that understanding to include the ancient memories held within the stones and the sacred geometry of these places. As I traveled to each area, I sought to absorb the history and the iconography of each of these ancient cultures. Invoking the memory of place, the vocal improvisations revealed a myriad of soundworlds and characters.

Through this process, I have come to a deepened understanding of sounding the memory of space. We are all born with the ability to read and respond to the sensuous Earth, for it is part of our ancestral heritage. Through sound, we can reawaken the lost connection with our bodies and the body of the earth, of Gaia, the primal life-force energy that runs through all beings.

Listen to excerpts from The Temple Project

Notes on the Composition Excerpts

Into The Hypogeum: This work was created from recordings made in the Hypogeum temple, a 6000 year old underground temple in Malta. The unique feature of this temple is the astonishing acoustics throughout the temple, and particularly in the Oracle Room. These recordings were made in Nov. 2004 when I was accompanied by Marlon Briffe, one of the curators at the temple site. The sound vibrations created in this unique site have a significant effect on both body and mind.
Skoteino Cave: This cave is an ancient goddess ritual site located in northern Crete. There are 4 levels to this cave, and many of the stalagmites in the upper chamber resemble the female figure. The recordings in this composition feature the environmental soundscape - the stones, bats, & doves. THe composition is structured as a journey from the coastline into the cave where the listener encounters both the natural sounds of the cave along with a mythical encounter with the ancient goddess through the vocal recordings.
Oracle: This excerpt from the larger work "Oracle" presents the listener with an entry into the acoustic soundscape of a variety of visited sites in both Crete and Greece. These sites include the temple site of Demeter and Persephone at Eleusis, the convent Panagia Kera, the Minoan temple sites of Knossos and Phaistos, a taverna in Matala, and the island of Patmos. A broad and sweeping instrumental sound texture propels the movement forward throughout these sonic vignettes.
Dikteon cave: The Dikteon cave is where Zeus was born according to Greek mythology and is filled with majestic stalactites and a small lake. The recordings for this composition were made in a side antechamber, the area in which Rhea, assisted by her mother Gaia, gave birth to Zeus.

Ancestral Landing is a video of images taken along the shoreline of Lake Ontario on Toronto Island with music composed from recordings made in the Hypogeum Temple.
CLICK HERE to watch or scroll down to next section to watch onsite.
The music for this video was created from recordings made in the Hypogeum during my second visit to Malta in 2007. It combines solo recordings that I made while walking throughout the different areas of the temple, and recordings of group toning. During my stay in Malta I had the wonderful opportunity of taking several groups of people into the Hypogeum for a one hour sounding experience. Again, Marlon Briffe was a guiding force which deepened everyone's experience of this transformative place.

One of the features of the Hypogeum is the well or cistern in which the icon now known as The Sleeping Lady was found. Other conversations I had while in Malta suggested there was a vast underground water system at one time. Certainly the sound of dripping water is ever present while in this place. In my imagination there is an integral connection between the Hypogeum and the element of water. This video brings together the elements of two locations: one that is home  - Toronto Island and the shoreline of Lake Ontario; the other where I have experienced a "landing of ancestral memory".

By deepening my connection with the ancient ancestors of a place the other side of the world calls me to experience the ancestors of the land which is home.  Moving from the waters onto the shoreline and eventually taking root is the journey portrayed in image and sound.

Composing for The Temple Project

In 2007, I composed a series of vocal compositions from these improvisations. In total, there are 16 different pieces, with varying lengths from 4 minutes to 12 minutes. Seven of these works are now available on The Temple Project CD. I have also presented a number of these works in performance, combining live improvised vocalizations with the composed works. A series of these works were presented at the Metageum conference in Malta, November 2007 in 8 track spatialization. These works have also been woven into two other compositions: Sounding Ariadne's Thread - for choral and electroacoustics to be sung while waking in a Chartres pattern labyrinth; and Baba Yaga's Journey: A Story Telling Soundwalk - premiered at Lighthouse Park, Vancouver for choral ensemble, narrator, and soundwalk participants. 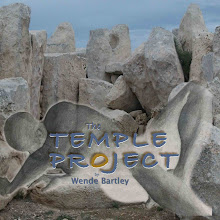 Text Elements for The Temple Project

Concurrently with composing the vocal elements, I have written a series of poems entitled "Blood Run Deeper". These poems were written while meditating over a period of 10 months with 7 different combination flower essences which make up the "The Destiny Kit". I worked with each essence for 4-7 weeks and each poem was written in a specific geographical place within Canada.

The Destiny Kit essences are part of Raven Essences, created by Andrea Mathieson. My intent in working with these essences was to connect with the voice of the earth, with Gaia, and let that voice teach me how to understand more of what the temples have to reveal, and how sound and the recovery of ancient memory is an integral aspect of healing our relationship with the earth.

I awoke from a dream in June 2006 with the phrase "Blood Run Deeper". At the time, I was working on a piece focusing on the Oracle traditions at Delphi in Greece. The mystery of this phrase has revealed itself through the writing of these poems. The titles for each poem are the titles of the flower essences used. Phrases from the poems will be incorporated in various segments of The Temple Project. Three of the poems are included below.


Blood Runs through me
Deeply I call you

Blood Runs Deeply now
Through my waters, rivers and cracks

I spoke
I taught
You listened

I have revealed the temple
The union


Blood Runs Deeper
Into the Crystalline form
of Sound

Sound echoing forever
Within the cellular modules of all beings

Preparing To Receive The Holy Fire

I am moving so quickly now
What you hear and see around you
Let it speak through the voice.
The cracks are larger now
Flooding and opening to the heart
My heart exploding, expanding
I draw you in to myself
Come closer…………
Let me whisper

What you see – this is how I create my space,
My time for myself
I spread myself wildly now
To weep and restore
For these places have not been honored
My rooms are my gifts
So that I may be known….
Deeply
Now

The wild child can hear me
Let her voice come
Running, running
Faster than you know
Blood….
Run deeply now

For further information on the works listed here or to order a CD, you can contact me by email: wbartley@interlog.com

For more details of other works, click on the following links:

No posts.
No posts.
Home
Subscribe to: Posts (Atom)

The Ggantija Temples are located on the island of Gozo, which is part of Malta. They date back to 3600-3200 BCE, and were excavated in 1827. The complex has two temples surrounded by a massive wall. Each temple has 5 apses with a central corridor. The images below show the interior of some of the apses and a section of the outside wall. 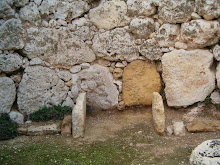 Mnajdra is located in the cliffs on the southern coast of Malta, and overlooks the island of Fifla. The Temple complex consists of three temples and an outside court area. Each temple was built at a different time period, and they span from 3600-2500 BCE. The lower temple is astrologically aligned to the equinoxes and solstices. 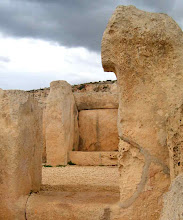 Window inside an Apse 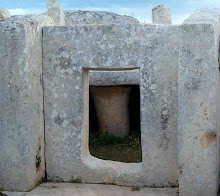 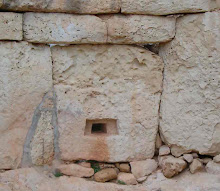 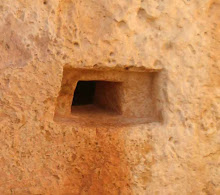 Hagar Qim is located 500 meters from Mnajdra and dates from 3600-3200 BCE. It is constructed as a single temple unit and excavations have unearthed many images of female figures with large rounded bodies. A triangular altar on the exterior wall sits next to the largest megalithic stone weighing 20 tonnes. 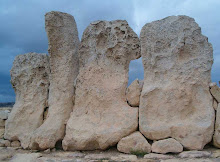 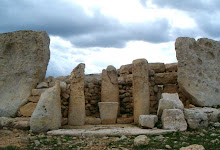 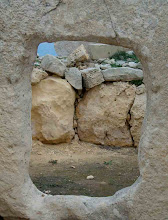 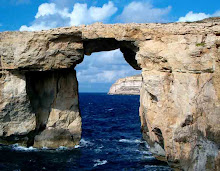